We, Human beings, are familiar with the changes and always have tried to bring on new changes for ourselves. We have achieved many goals which were actually revolution for all humans. We transformed the weapons of past (which were of woods and stone) to newest atom bombs and transformed largest machines into smallest devices. I am going to get you through a whole new level of transform in computers.

What is Quantum computer? 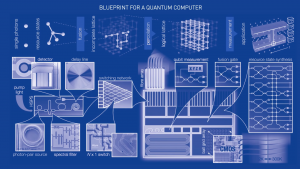 Qubits are the basic units of quantum computer for information storage. A qubit can be a photon or spin of a magnetic field. Unlike bit (which can be “0” or “1”), qubits can be “0” and ”1” in a single time which is called the superposition of qubits. 4 bits can make a maximum combination of 16 while one qubit, in superposition, can make all of the 16 combinations individually.